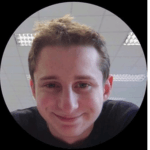 Thank you so much everybody! It's been a fantastic event. I hope you all took away some great information - it's been lovely answering your questions! Big thanks to the organisers and other people in the Nobellium zone - it's been grand!

No questions to show